A police officer has praised customers and staff at a fish and chip shop and an unknown nurse on holiday who rushed to help an eight-year-old girl who had collapsed.

PC James Perkin also gave full credit to the paramedics who worked to save her life after a suspected cardiac arrest at St Ives.

Members of the public were also able to grab the defibrillator nearby, outside the Lifeboat Inn, which had been bought through donations to the Ronnie Richards Memorial Charity.

The girl had collapsed on Wednesday (November 1) at the Harbour Fish and Chip Shop on Wharf Road.

PC Perkin was on duty at St Ives Police Station when the drama unfolded in the afternoon.

He said: “I saw the call come in and knew it was for us when it said St Ives. Then when I saw it was an eight-year-old girl in cardiac arrest I just grabbed my helmet and ran.

“I was passed by the ambulance in the Market Place and when I arrived the paramedics and ambulance staff were performing CPR on the child and managed to bring her back.”

“It appears that the child has a medical condition and this caused her to go into respiratory arrest leading to a cardiac arrest.”

He praised the quick-thinking actions of staff and customers in the fish and chip shop.

“An unknown nurse, who appears to have been on holiday and was eating a meal at a nearby table, also assisted,” he said. “I have no idea who she is but she just wanted to help, which is typical of such people. Staff at the shop also grabbed the defib from the wall behind the Lifeboat Inn.

“The girl was put into the ambulance and driven to Ayr playing field where she was transferred to the air ambulance and taken to (Royal Cornwall Hospital at) Treliske.

“I also have to say, the paramedics there were remarkable people. The way they working to save the girl’s life was amazing.” 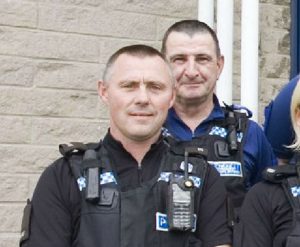 PC Perkin said he was called later in the evening by his police sergeant who told him that the girl’s heart was beating on its own and she was breathing unassisted.

He added: “To hear she was OK was a great feeling. I was thinking about her obviously and it was a lovely thing to hear.”

It was somewhat surreal changing the AED pads knowing that they had been used on one so young but a brilliant outcome – Closely linked PADs and CPR & AED training works!