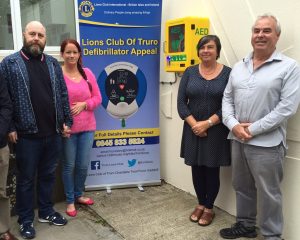 The parents of a girl who died after she suddenly collapsed in school have presented a potentially lifesaving defibrillator to her school.

Esmee Polmear was just seven years old when she collapsed at Perranporth School in July. Despite efforts by school staff and paramedics she died after she arrived at Royal Cornwall Hospital.

In the days after the tragedy the community of Perranporth rallied around Esmee’s parents Mark and Lynette Polmear and set up a fund to help pay for the youngster’s funeral.

Mr and Mrs Polmear said they also wanted to fund a defibrillator at the school to be put in place to help anyone else who might suffer cardiac arrest.

However, the Ronnie Richards Memorial Charity (RRMC) and Truro Lions Club stepped in and helped to provide the equipment.

The RRMC got a defibrillator company, Heart Sign Technology, to donate the equipment while the Lions Club donated the cabinet it is stored in.

On Friday the defibrillator and cabinet were officially unveiled at the school with Mr and Mrs Polmear attending the event.