The girl was on holiday when she collapsed in the street just down the road from a Ronnie Richards Memorial Charity emergency defibrillator.

An emergency kit bought through public donations has been used to save the life of an eight-year-old girl.

The youngster collapsed in the street beside the harbour in St Ives of a suspected cardiac arrest.

She was on holiday in the busy seaside town with her family when she collapsed on Wednesday (November 1).

Just down the road was an emergency defibrillator at the Lifeboat Inn, which was paid for by the Ronnie Richards Memorial Charity. The emergency kit can be used by members of the public to give shocks to the heart.

Paul Williams helped set up the fund in 2013 in memory of his brother-in-law, Ronnie, who collapsed and died while playing football in Penzance.

He said: “We are proud and delighted to report that our defibrillator at the Lifeboat Inn was used on Wednesday. It was used in the cardiac arrest save of an eight-year-old girl outside a fish and chip shop.

“She was on holiday with mum and dad and two siblings. I am delighted that the defibrillator was able to help save a person so young, who now has her life to look forward to.”

Mr Williams added: “We have come such a long way since we launched the Ronnie Richards Memorial Charity. At the time, there was not one unit on the South Western Ambulance Trust’s operational system that to date is now a rapidly increasing nearly 220 in Cornwall and nearly 60 in Devon.

“Around 9,000 people have been trained including around 3,000 secondary students in the UK at Humphry Davy School Penzance, Cape Cornwall St Just, Camborne Science & International Academy and St Ives School.”

He said 14-year-old Henry Snelson from Cape Cornwall School and a 10-year-old girl each separately performed CPR on their fathers who had cardiac arrests at home, with both making full recoveries.

He added: “The latest save of the 8-year-old girl makes our success extra special.” 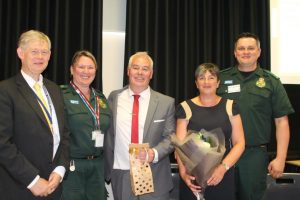