Bar staff who rushed to save a man’s life after he collapsed said they were thrilled to hear he has survived.

The man in his 80s fell from his chair in the Paris Hotel, in Coverack, after suffering a suspected heart attack.

The man and his wife, who have not been named, were visiting the seaside village on the Lizard peninsula for a holiday when they popped into the pub for lunch.

Jasmine Darnell was working behind the bar that day and said: “I’d pulled him a pint and he and his wife went and sat in the restaurant. I looked up and he just slid off his seat.

“I thought at first he’d just fainted. His wife shouted for help and I ran into the kitchen to get the cook.”

Ms Darnell was joined by her fellow staff members, her sister Emily Darnell and cook Rob Ford, who all dashed forward to help the unconscious man.

She added: “My sister is a trained lifeguard and she and Rob went to put him in the recovery position. I didn’t know what to do for a while and I thought: ‘I am going to ring the ambulance’.”

She was advised to grab the nearest defibrillator by the emergency call handler and, looking out of the window, said she saw the machine on the wall of the Fisherman’s Rest building over the road.

The three were joined by members of the public and used the life-saving kit until an ambulance arrived around 20 minutes later. 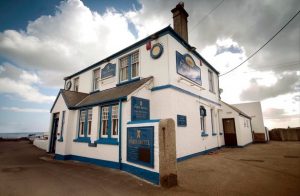 Ms Darnell said they have now heard from the man’s daughter, since the incident on Thursday, November 16, that their quick thinking and use of the defibrillator had save his life.

The machine is one of two in Coverack, which were bought from money raised by an appeal by Pam Patten, following the sudden passing of her husband Barry from a heart attack in 2012.

The first machine was installed in the Coverack Information Point by the seafront while the second was placed outside the Paris Hotel. They were bought through the Ronnie Richards Memorial Charity in Penzance.

On hearing that the machine had been used for the first time with such a successful outcome, Mrs Patten said: “It’s fantastic. The staff in the pub worked really hard to keep him alive.

“This is the only time that this defibrillator has been used. The other one was used before, but unsuccessfully.”

She also praised the efforts of Vanessa Millar, who has trained hundreds of people on first aid and how to use the defibrillators.

The defibrillator at the information point was destroyed after it was washed away in the floods of July. Mrs Patten said that within weeks of launching a new campaign, the community had come together to pay for a replacement.