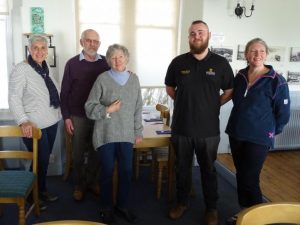 A HOLIDAYMAKER has returned to Coverack to say thank you to the people who saved his life when he suffered a cardiac arrest four months earlier.

Michael Priestley, 80, from Charmouth in Dorset has revisited the Paris Hotel, where quick-thinking staff gave CPR and used a defibrillator to keep him alive until emergency services arrived.

Michael and his wife Joanne had been holidaying on the Lizard Peninsula last November when they visited Coverack and popped into the Paris Hotel for a drink.

Shortly after returning from the bar Michael keeled over at the table and his wife Joanne immediately shouted for help. Jas Darnell, 21, a waitress at the Paris Hotel, called other members of staff to come to Michael’s aid while she called the emergency services.

Emily Darnell, 19, and Rob Ford, 25, found Michael still slumped against the window at his table. He wasn’t breathing so they moved him to the floor and Emily’s checks revealed there was no pulse, so they began CPR. Meanwhile, a bystander ran to the harbour to get the public access defibrillator.

Rob then followed the voice prompts to deliver two shocks. He has since praised how useful the prompts were in helping him save Michael, as the last time he did any CPR was on a practice manikin while in the scouts as a young boy.

The pair then continued with CPR until Adam Martin, a first responder with the fire service, arrived. He found that Michael now had a pulse but he was still not breathing adequately, so Adam gave support until he was breathing regularly on his own.

Michael was airlifted to the Royal Cornwall Hospital in Truro and has since received further treatment in March at the Dorchester Hospital in Dorset, but said he was now feeling much better.

Back at the Paris Hotel, Michael said he couldn’t remember much about that day, only that he had sat on the wall reading his paper then went in for a drink; the next thing he remembers is waking up in hospital the next day.

Michael’s wife Joanne said she could only remember that Michael keeled over and she shouted for help, then hearing Jas make the phone call to emergency services. She has no recollection of what was happening on the floor around her.

When asked how it felt to be sitting there with a man that would not be alive if he hadn’t come to his aid that day, Rob said: “Incredible, I can’t really explain how I feel.”

The machine used was one of two in Coverack that were bought from money raised by an appeal by Pam Patten, following the sudden passing of her husband Barry from a heart attack in 2012.

The first machine was installed in the Coverack Information Point by the seafront while the second was placed outside the Paris Hotel, bought through the Ronnie Richards Memorial Charity in Penzance.

Unfortunately, Coverack lost one of its defibrillators in the recent Storm Emma, but Michael has donated a new one to the community who helped him thanks to the company Physio Control Heartsine, which made the equipment used, allowing a survivor of a cardiac arrest to donate a new defibrillator to any organisation of their choice, through its Forward Hearts Programme.