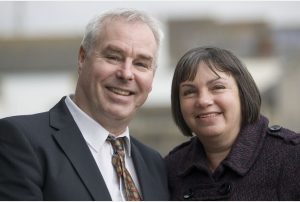 We are Paul and Liz Williams, co-founders of the non-profit Penzance, Cornwall based Ronnie Richards Memorial Charity (RRMC). The charity was established in memory of Liz’s very close brother and my good friend and brother-in-law, Ronnie Richards. Ronnie was a well-respected and affable character who sadly collapsed and died from sudden cardiac arrest (SCA) whilst playing his beloved game of football at Penzance Leisure Centre.

Many years ago I suffered a very serious accident and nearly died. Ronnie and Liz were constantly there for me and without their support and encouragement I doubt whether I would have recovered. Shortly thereafter, Liz and I were totally devastated when Ronnie, who was fit and healthy, suddenly collapsed and died. It is an absolute pleasure to carry his special name on in the work that we do.

On 29 June 2017 the RRMC celebrated its 200th sited PAD in Cornwall, at Humphry Davy School, Penzance. We were also proud to announce at the event that several thousand people had also been CPR & AED trained, including (the first in the UK) around 2,500 secondary school students at Humphry Davy School (Penzance), Cape Cornwall School (St Just), and the Camborne Science & International Academy. As of March 2020 around increasing 7000 county students trained including St Ives and Hayle schools. 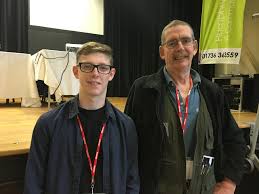 Both West Country Television and BBC Spotlight Television featured Henry Snelson, from Cape Cornwall School, who when 14 years of age saved his father Tony, who suffered a cardiac arrest at home. Without Henry’s CPR and incoming defibrillator shock, his father would have died.

Across the UK 2,000 people die each week after suffering a sudden cardiac arrest (SCA), which is the equivalent of one person every 5 minutes. This statistic includes one child daily in our schools.

According to the European Resuscitation Council (ERC) a shock by defibrillation administered within one minute increases the chance of survival by 90 per cent.

The survival rate without being shocked decreases by 10 per cent and 14 per cent with every passing minute. 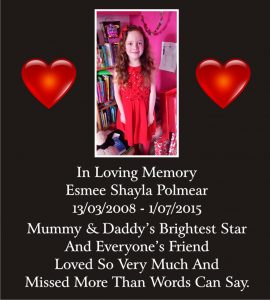 In attendance at the Humphry Davy School event were special guests Lynette and Mark Polmear, who received a memorial plaque in treasured memory of their beloved young daughter, seven-year-old Esmee, who tragically died from cardiac arrest at Perranporth Primary School.

The RRMC secured a 24/7 external PAD to cover the school and surrounding community and trained all the teachers.

The RRMC PAD programme is structured like that in Seattle, Washington, USA, who with a similar population to that of Cornwall (around 630,000 people), have 3,000 PADs and 75 per cent trained boasting a world record out-of-hospital cardiac survival rate of around 70 per cent. By training all of Cornwall’s secondary school students and communities, supported by our rapidly increasing closely linked PADs, we hope to achieve the same success.

To ensure that the best possible infrastructure is in place, we work very closely with, and are supported by all of the major emergency agencies, including the South West Ambulance Service Trust (SWAST), Hospitals, GPs, Devon & Cornwall Police, Cornwall Fire Brigade, National Coastwatch Institution (NCI) and Surf Life Saving Great Britain (SLSGB).

SWAST have all our PAD sites on their operational system. The control operator will direct the 999 caller in a heart attack or cardiac arrest situation to a nearby PAD site if available and guide throughout. For external keypad cabinets they will give the access code.

The non-profit RRMC is comprised of dedicated unpaid volunteers and in securing greatly reduced prices for top quality PAD equipment pass on every penny in savings. Our reward is quite simply the saving of lives.

The RRMC has the most progressive PAD programme in the UK offering the following benefits: –

The PAD programme is supported by an increasing many thousands of people under the RRMC network.