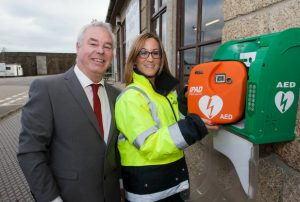 Paul Williams, founder of the Ronnie Richards Memorial Charity, with Sharon Sandercock from the Isles of Scilly Steamship Group.

The memory of a devoted family man from Penzance is still saving lives today in west Cornwall.

The Ronnie Richards Memorial Charity (RRMC) was founded by Paul Williams in memory of his brother-in-law, who died after a sudden cardiac arrest in 2008.

Born in Penzance, Mr Richards was a keen sportsman who enjoyed tennis and cycling, but it was while playing his favourite game, five-a-side football, with his son and work colleagues that the 55-year-old collapsed and died of an undetected heart problem at Penzance Leisure Centre.

A year later Mr Richards’ family and friends organised the first in a series of hugely successful charity tournaments in his memory, which in turn led to the formation of the RRMC.